Perhaps you’re new to the secret language of beer. Maybe someone asked you to brew a dry batch. Or it could be that you grew up hearing “Why ask why? Try Bud Dry” on television commercials around the world.

What, in the world, is dry beer?

In a word, or two rather, dry beer is simply “not sweet.” But, of course, it gets so much more complicated than that.

Beer Has Never Been Dry

The idea that beer can be not sweet is relatively brand new, as only in this century did we start brewing and then asking for and expecting dry beer.

Historically, beer was processed to savor some of the sweetness of the grain. After all, if you think about it, beer has long been a source of nutrition for entire families.

Beer – in the Beginning

Remember that the very first beer was likely created by accident, and likely by a woman.

Picture it: she’s out in her barn or silo, picking out the grain for her meal, maybe bread, maybe a porridge of some kind. She has her grain in a basket or tub of some sort and gets distracted (it’s probably the kids). She loses track of what she was doing with the grain. A storm breaks out that possibly keeps the family inside for days.

Now that grain has sat for days, wet, soaked, sitting in its own water.

By the time the woman gets back to her basket, the grain has turned to a sort of bread dough beer mash mush.

Never one to waste food product, she serves the mush and runoff to her family. Children need to be fed, after all.

A euphoric effect takes place, and now you have the first ale in history.

Over time, word spreads, and families, communities, and even the nobility, begin brewing and perfecting beer.

But that process of perfecting is never far from the original “accident.”

Grind grain, usually barley or wheat, but at times also oats. The grinding process breaks open the grain and exposes the sugars inside. Boil the cracked grain in water to release those sugars. Leave the liquid (now called wort) out for a few days, filter out all the solid particles, and serve what is now ale to your family.

Over time, brewers discovered they could roast, or kiln, the grain first to get it even more sugary.

Now, what is happening when the grain is left out is that yeast is consuming the sugars and converting them to alcohol. After a few days, you have a lightly alcoholic beverage that has maintained some of its sweetness. To cut down on any too sweet effects, brewers began adding herbs after fermentation.

The herbs were once a blend of various plants referred to collectively as “gruit.” Today, most brewers simply use hops. The hops add a bit of bitterness, which balances the sweetness.

See? Not too far from the original accidental beer.

Of course, over time, and obviously thanks to commercialization and industrialization, brewers have experimented with all kinds of changes and edits to that refined beer process.

What Does Dry Mean in Beer & What Makes Beer Dry 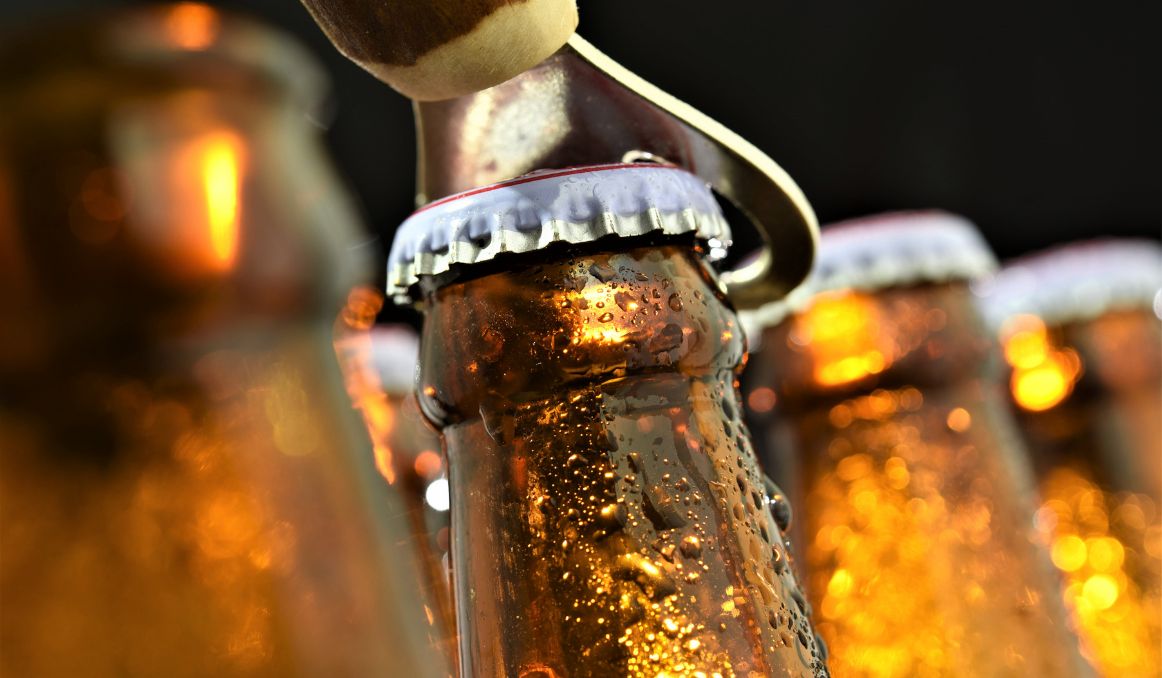 The easiest and most obvious way to make a beer dry is to allow it to ferment longer.

The first dry beer was apparently made in Japan in 1987, and it has come to be what Japanese beer is known for, its dryness.

They simply allow for longer fermentation, which allows the yeast to convert all of the sugars and starches to alcohol, therefore typically creating a higher alcohol content and no sweetness at all.

American beer companies took up the challenge and began experimenting with dry beer, most notably Budweiser from the commercial reference above. And America is now the largest producer of dry beers.

But, in America, dry does not always mean more alcohol.

And indeed in Europe, dry beer tends to have less alcohol and fewer calories.

How is this possible?

There are two other methods of producing dry beer, which don’t necessarily increase alcohol content.

The first is mashing low, which encourages enzyme activity, which in turn makes an extremely fermentable wort. The second is using little to no crystal malts, which means less sugar up front. Both of these processes do not necessarily create more alcohol.

Thus, when you hear the term dry in reference to beer, yes, the general understanding is that it is less sweet, but it can be more elastic than that.

As usual, it pays to do your own experimentation, both in brewing and in drinking. Check out the variety of dry beers on your market shelf.

Pilsners, West Coast IPAs, and Belgian Ales tend to be dry or on the dry side, so you can start there. Then, move on to Japanese beers like Kirin and test the difference for yourself.

If you’re brewing, experiment first with longer fermentation and see where that takes you. Then you can play around with mashing low or decreasing your crystal malts.

Have fun with it, see where it takes you, and get your friends and your lab equipment involved so you can get subjective opinions and objective analysis.