So you’re sitting with your favorite beer, and suddenly you notice a hint of banana you’ve never noticed before. Or maybe you’re out exploring new brands and styles, and banana hits you with this new brew?

What you’re probably tasting is an off-flavor, one of many that can occur during the brewing process.  Banana off flavor in particular can be accidental or cultivated on purpose.

Brewing: An Art and a Science

While for most of us today, beer seems like a simple matter of fact issue, it once was not only a staple of human civilization, it was also much different from the beer we drink today.

The first beer was likely a happy accident caused by a woman out harvesting grain for her family. For whatever reason, the grain was left out, rain struck, and the grain got wet and sat in rain water for days.

The end result would have been a soggy grain, now resembling bread dough, and some runoff water that was fizzy and bubbling.

Of course, we don’t waste food when our very survival depends on the staples from our gardens.

So the woman would have created the first unleavened bread from the grain – now lighter and fluffier than the leavened bread everyone was used to – and the rain water, clean in and of itself, was now converted to a highly nutritious beverage that had a low alcohol content.

Yeast plays a critical part in the production of any fermented food, as most of us already know.

It converts the sugars in any food product to alcohol and carbon dioxide.

In bread, this process makes the dough expand, and then the alcohol burns off during baking as yeast and alcohol cannot survive high temperatures.

When it comes to liquid, this process makes our favorite alcoholic beverages.

In beer specifically, those early days of beer production would have produced a very low alcohol content because it is unlikely mothers making ale at home for their family were taking the necessary steps to increase alcohol production.

You see, those early beers, ales, were made via the most simple process imaginable. To repeat what she had done the first time, the woman would have simply boiled and soaked her grain, usually barley, but sometimes wheat, in water, and then allowed the same process to occur, as she had no idea, nor did any of us, about yeast and all it’s wonders.

She just knew that leaving grain in water resulted in an ale.

Perhaps over time she clued in to grinding the grain before the boiling and steeping process, which would allow more of the grain’s nutrients, including its starches and sugars, to seep into the water.

But still, yeast converts sugar, not starch, so it has to work pretty hard to extract sugar from starch and then convert it to alcohol and carbon dioxide. The less actual glucose present in the liquid, the lower the alcohol content you will have as an end result.

Over time, of course, women in villages would have experimented more with flavors and aromas, textures and styles.

Remember that beer was a staple in most families for centuries; fresh water has long been a concern when it comes to serving beverages to your family, so ale is a perfect answer to that problem.

Ale would have provided hydration to the whole family with a meal, as well as nourishment for hungry kids as ale is packed with the nutrients from the grains and the benefits of healthy bacteria and the yeast attracted during the fermentation process.

The addition of an herb to cut down on the sweetness of ale came a bit later, and brewers began adding various mixtures of herbs, collectively called “gruit.” Then the discovery of hops became the global solution to adding bitterness to beer.

So… Bananas in Beer?

Along that route of experimentation, brewers discovered that different approaches, different strains of yeast, and various temperatures would impact flavor and aroma.

Today, we know that yeast does not only produce alcohol and carbon dioxide during fermentation; it also produced hundreds of micronutrients as well as chemical compounds called esters.

Esters can range in flavor from fruit to bubblegum to spice and yes, to bananas. And those are the good ones.

Other esters can offer off flavors like baby vomit and garbage.

It all depends on the yeast and the brewing process. 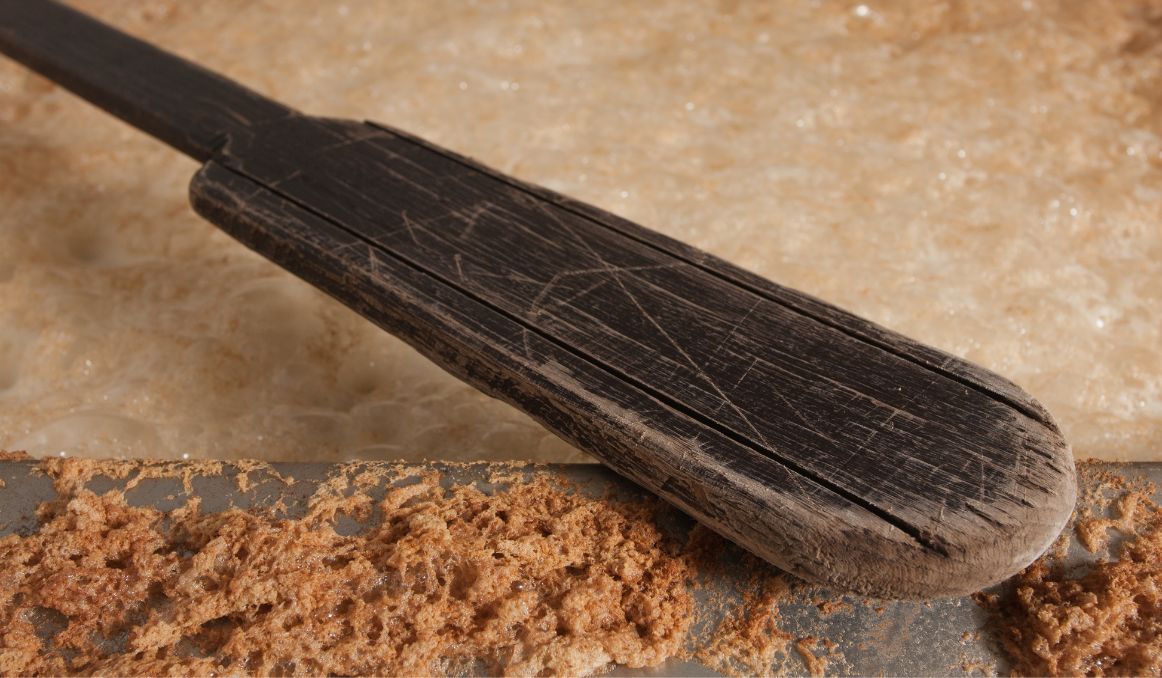 You see, while brewers may have only recently learned of what yeast is and what it does exactly, thanks to Louis Pasteur back in the early 1800s, they always knew something was happening.

Ale, the very first beer, attracts top fermenting yeast, which means that once fermentation is complete, the yeast collect, or flocculate, side by side in a kind of raft, at the top of the vessel.

Eventually, brewers would have clued in to the fact that it is this “stuff” floating on the beer that is actually making the beer. They could then collect and reuse, or repitch, that yeast for their next batch, particularly if they liked the batch.

Thus, when brewers discover banana flavors in their wheat beer, they would save that yeast and repitch it, allowing it to grow and multiply over time, keeping them always with a steady supply of banana ale yeast.

That’s how the first Bavarian Hefeweizen was born, a wheat beer that is known for its banana flavor, reminiscent of banana bread.

How to create banana off flavor in beer?

The trick to creating those banana off flavors, if that is your desire, is to pick an English or European ale yeast strain, keep your fermentation temperature cooler, which will make fermentation last longer, and consider pitching a smaller amount of yeast than usual, as it is the extra work the yeast must do and the extra time it takes to do it that seems to bring out those fruity esters.