The term lager gets tossed around a lot in the beer world, with many people unable to differentiate between lager and… whatever other kind of beer we hear about. Stouts, wheat beers, ales, pilsners – just a few names we hear bandied about.

But what is lager, and what does lagering mean in terms of brewing?

A Brief History of Beer

To begin at the beginning, thousands of years ago, when beer was first discovered, lagering was unheard of.

The term “lager” comes from the German word meaning “to store,” and we will discuss how this fits perfectly in a moment.

First, we must understand what lager lies in contrast to.

The first beer was ale.

A grain was toasted, ground or cracked open, boiled and steeped, and left to the open air. Yeast, happy in any warm, moist environment, then settles in to consume the sugars in the wort and converts those sugars into alcohol and carbon dioxide.

Over time, ale drinkers found their beverage too sweet, and they added a combination of bittering herbs, called gruit, to cut down that sweetness, adding more protein which also helped retain the head on the beer, giving it that classic frothy, foamy cap.

For thousands of years then, people drank ale with each meal.

It was a beverage best made in warm weather months, perfect for the end of harvest time, right as grain was pulled from the ground. Batches of ale would then be brewed and preserved to get people through to next harvest season.

The alcohol and the hops helped preserve this beverage that was for a long time the safest drink to consume for every member of the family, including children.

Early ale was low in alcohol and low in carbonation – a nutrient rich, probiotic drink that indeed saved lives as children were no longer drinking toxic water from contaminated sources. Further, sometimes the most nutrients a family would get would come from their ale.

Then, in the 1400s, a group of Bavarian monks thought to store their fermenting ale in icy alpine caves over the summer, not realizing they were tapping into an entirely different yeast source.

Lager was an accident as much as ale was, a discovery made by those monks simply looking for a cool storage place.

In the presence of ideal temperatures and plenty of sugar, that lager yeast sprang into action and created an entirely different beverage.

It makes sense then that lager is named for the word “to store” as the entire process was happened upon as a result of monks looking to store beer.

Today, when we think of lager versus ale, we think of a lighter, crisper, clearer beer that is usually lower in alcohol content.

Lager yeast has a lower alcohol tolerance, so it will stop fermenting sooner than ale yeast does, resulting in a beer with lower ABV.

What Does Lagering Mean? 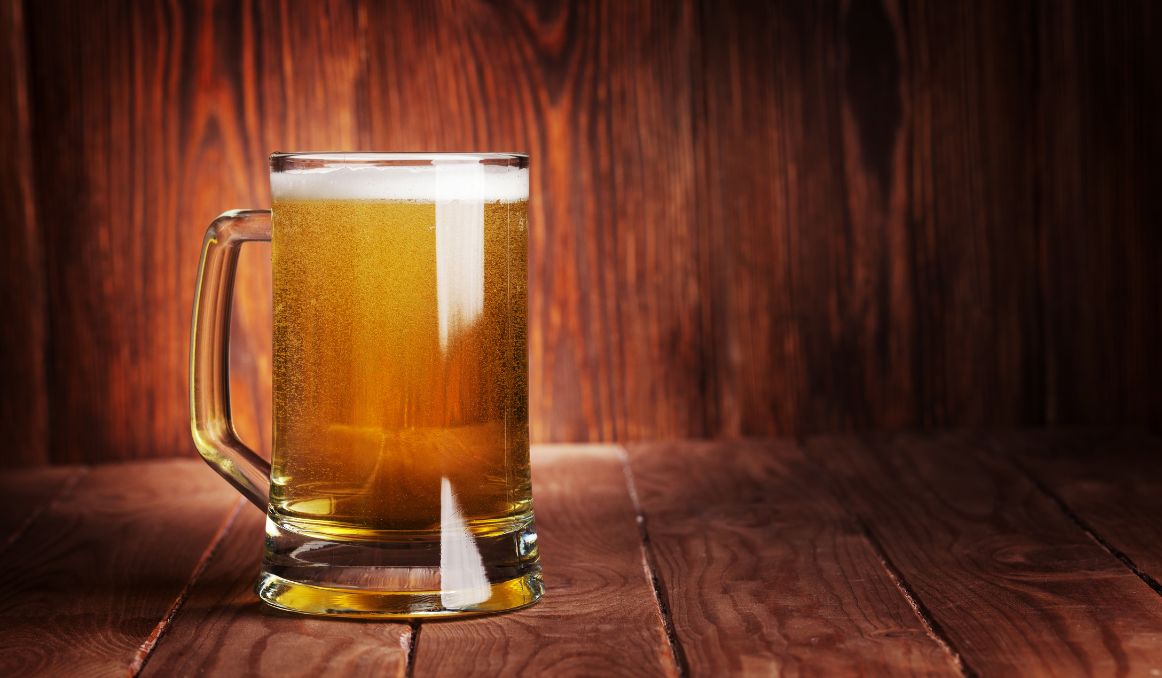 It doesn’t have to be.

First, we have lager, which is the name we give beer made using lager yeast, which ferments at cooler temperatures and flocculates on the bottom of the fermenting vessel.

Then, we have “to lager” beer which refers to the process of cold storing beer once it has finished primary fermentation.

The purpose of lagering is to smooth out flavors, allow any lactic or acetic acids to settle, and to provide more clarity in beer.

Lagering also slows down fermentation as the temperatures required are near freezing level.

How to Lager Beer

To lager beer, you will brew and ferment as usual, and then, once primary fermentation has ended (you can tell this by the fact that krausening has peaked and fallen), give your beer time for maturation, also known as diacetyl rest.

This stage allows your yeast to clean up after itself, smoothing out and eliminating most common off flavors.

You will generally allow your beer to lager for anywhere between 4 to 12 weeks, and the rule of thumb is the longer the better.

During this stage, the proteins, yeast, and other sediment will make their way to the bottom of the vessel, which will clarify your beer and mellow out all remaining flavors.

Can You Lager Ale?

Yes! Believe it or not, you can lager ale.

You will proceed through primary fermentation and diacetyl rest, or maturation, as usual, with your ale yeast, and then simply follow the same steps for lagering above, slowly dropping the temperature and then aging your beer.

The goal of lagering either ale or lager is clarity and smoothing out of flavors, which both beers can benefit from.

The only real difference you’ll notice is the higher alcohol content in ale, as determined by its yeast, and the much maltier flavors in ale versus the fruitier flavors you’re likely to get from lagers, but again, much of that will also have to do with the other ingredients, and even the substrains of yeast used.

In the end, it cannot hurt to lager your beer, ale or lager, and it is commonly thought that it can only help.