The question has been asked for ages: how much head should a beer have? And the answer remains the same. In general, a beer should have a foam head of about ½ inch to a full inch thick that lasts for much of the duration of the life of the beer in the glass.

Beer, in fact, is the only beverage that retains its head, and beer drinkers have come to expect this, even if only intuitively.

Why is that? And what’s so important about beer head anyway? 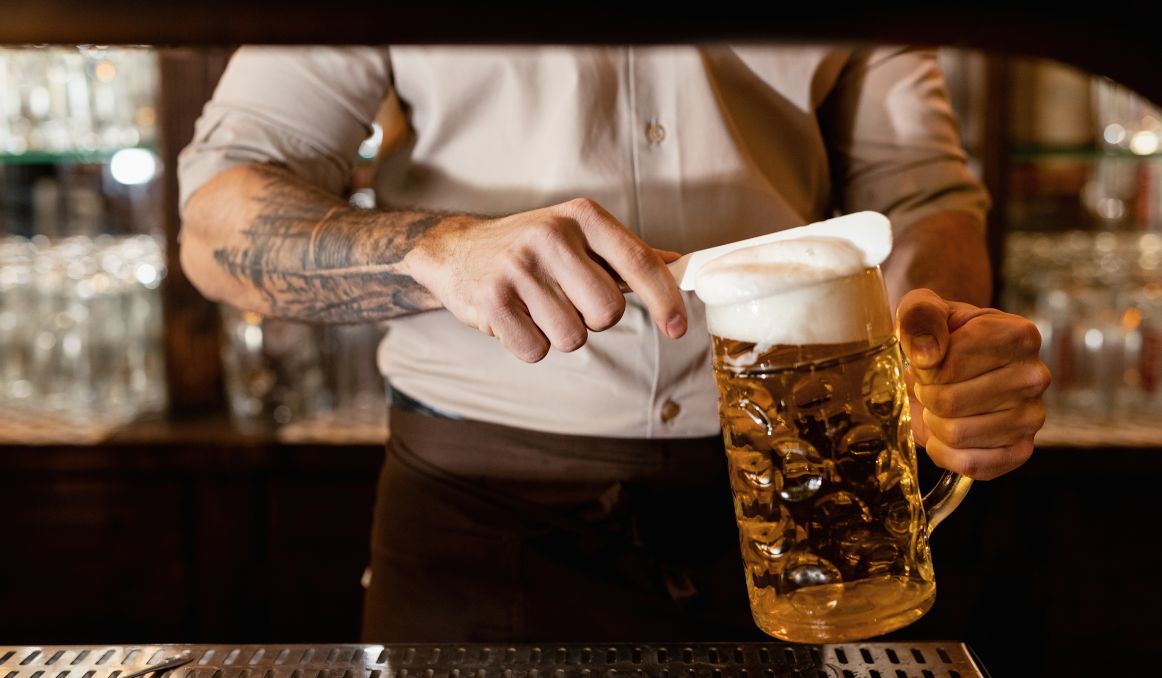 What Is Beer Head?

Beer has a thick foamy top we call “head” thanks to the high protein levels in the beverage. The proteins that come from the grains as well as the hops are “hydrophobic,” meaning they are repelled by water, so they cling to the carbon dioxide in the beer, rising to the top of the brew when it is poured and helping the carbon dioxide stay in the brew.

Because of this combination of proteins and carbon dioxide in the head of beer, your beverage will stay fizzy and bubbly for the duration of your drink, rather than going flat almost instantly as the CO2 rises and dissipates.

To the point, head on beer is what keeps your beer from going flat. It acts as a barrier for your carbon dioxide to remain in your frothy beverage.

Head also has a huge impact on mouthfeel and texture, which anyone who has enjoyed a nice creamy stout can tell you.

As you drink beer, getting that little bit of foam mixed in with the brew changes the experience entirely.

Without head, the beer will taste mostly flat, ruining the entire effect of sitting for a crisp, bubbly beer.

How Much Head Should a Beer Have?

In general, as noted above, a beer should have approximately ½ inch to 1 full inch of head on the top of the beer.

But when it comes to those oatmeal stouts, it pays to have up to 2 inches of head on the beer to achieve ideal mouthfeel and carbonation for such a thick, heavy brew.

How to Create Perfect Head in Beer

For brewers, sometimes the issue comes down not to creating head but to retaining it.

Many brewers will find their beer has no problem with carbonation, so that’s a bonus. Carbonation is a natural byproduct of fermentation, and if your beer is producing head when poured, you have achieved that.

But then, the head may die almost instantly.

From a brewing standpoint, this reality can occur for various reasons.

First, you may not have enough protein content in your beer, so you may need to increase your barley content, or even mix in some wheat, a grain which is very high in protein.

However, you must note that you will be trading protein for clarity.

You can see the amount of head is maximum and lasting in virtually any wheat beer, but the level of haziness is just as maxed out.

Yes, those proteins in wheat beers tend to attenuate at a much lower rate, retaining all of those proteins and yeast cells suspended in the beverage.

This haziness is not only a great thing for many beer drinkers, but it is also often sought after.

But, if you are trying to gain clarity, you may have to be willing to sacrifice some head.

It’s truly a tricky trade off.

Second, you can take a look at your hops. Hops are a critical component to the production of head in your beer. The polyphenols in hops help retain foam bubbles at the top of your beer, so you can always add in hops if you are willing to up the bitterness in your beer.

And if you’re hoping for less bitter, but still hoppy beer, you can always dry hop, adding your hops in closer to the end of your fermentation, ensuring the hop flavor and foam without tipping the scales too high in IBUs.

Next, watch your brewing technique.

Choosing a higher mash temperature, in the 68 degrees to 70 degrees Fahrenheit range, will create longer dextrin chains in your finished beer, and lower attenuation during fermentation. All of this will lead to better head retention in the long run.

Finally, your head issues may have nothing to do with your brewing process at all.

It could simply be a matter of unclean, or oily, glassware.

You want to serve your beer in sanitized, oil free glasses that have been chilled to refrigeration levels. Any oils will kill your foam almost on impact, and any dirt or grime still in your glass will also inhibit its retention.

So clean and chill those glasses!

How to Pour the Perfect Beer

And when all is said and done, be sure you know how to pour your perfect beer for head.

Sometimes, brewers think you simply have to make a great beer, and haven’t quite mastered the art of delivering an already perfect beer into a perfect pour.

When pouring beer, from a tap, a can, or a bottle, you want to tilt your glass at a 45 degree angle, so almost sideways, and fill your beer about halfway up the glass.

Then, turn your glass so it is straight, and pour the rest of the beer straight down the middle of the glass.

And of course, you can experiment with various approaches, tilts, and timelines along the way.

For stouts, for example, it is often best to pour half the glass at a 45 degree angle, then allow the beer to sit for a few minutes. Then return to pour the rest of the beer.

As with most things, it’s all about time and patience.