Kombucha has become a much touted and celebrated wonder drink of sorts in the western world, leaving many wondering how healthy it really is, and if there are side effects to worry about.

Does kombucha have health benefits for the liver… and beyond? 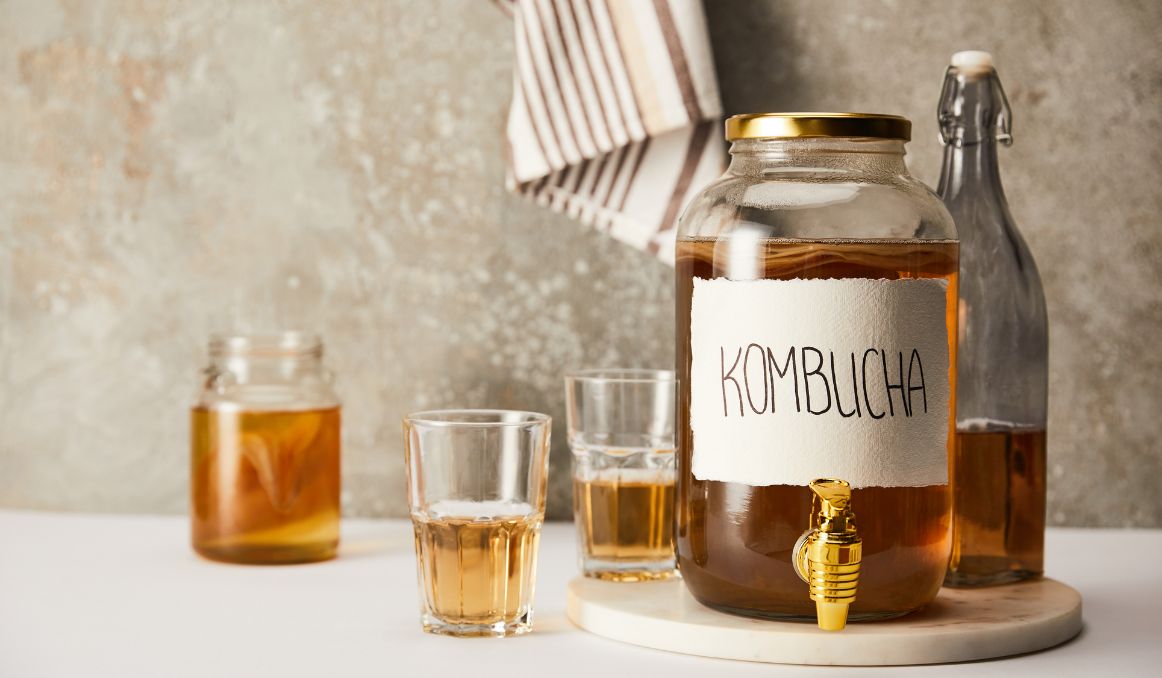 Kombucha has an interesting back story, and it is a bit more complex than most fermented foods and beverages.

Usually, when making beer or wine, you simply take the primary ingredient – be it grain or grape, in some cases cook it to some extent, expose it to yeast, and allow it to ferment.

Fermentation, in general, provides antimicrobial protection against harmful bacteria, so fermentation has long been used to preserve food and drink and to sanitize some beverages, like water, for instance.

Thus, the path to beer, wine, bread, yogurt, even fermented fish and vegetables like cabbage, was a fairly simple one and easy to trace back to its origins.

How Kombucha Is Made

Kombucha is made from two primary ingredients – tea, green or black, and sugar.

Then, something called SCOBY is added. SCOBY stands for a symbiotic culture of bacteria and yeast.

The liquid is left to ferment for a week or two, and then put in a cool space for secondary fermentation, which is much slower.

The resulting beverage is vinegary, fizzy, and slightly sweet.

But what’s up with SCOBY?

It is understandable how, when beer or wine was made, yeast was naturally attracted, and then when scientists discovered the role of yeast, the fermentation process was refined.

But kombucha has been made in Asia for thousands of years, all the way back to 200 BC as far as records show.

How did a symbiotic culture of bacteria and yeast get involved?

The only thing that makes sense is that, much like with sour beer, both yeast and bacteria must have arrived on the scene at the first kombucha party and developed this interesting mix. From there, the fermentation process was refined and protected, so that the environment was always reproduced with both yeast and bacteria.

Maybe it is something in the tea.

Legend has it that a monk fell asleep and a bacteria-carrying insect landed in his fresh pot of tea. The tea was forgotten, and the necessary culture formed. He loved it so much that he shared it with friends.

What we do know is that once a fermented drink is produced, you can use that same drink to ferment the next batch, and so on. The active yeast in the drink will get to work fermenting a fresh, as of yet unfermented batch.

That is actually what yeast starter is made from, an already fermenting beverage.

Basically, you are using yeast that has already been activated, or “started.”

Once the first batch of kombucha was made, it would have been relatively simple to recreate.

The problem with talking about the health benefits of kombucha is that there just is not enough scientific evidence to support any claims. These things can take decades, and we don’t have decades under our belt yet.

Kombucha was a fairly well kept secret in the Asian world for centuries.

Finally, around World War II, Germany discovered kombucha in Japan and introduced it to the European culture.

But it still took a long time to catch on.

Think about it – a fizzy vinegar drink from Asia in the western world? Most people would turn their noses up.

It did not really take off in the west, and even then only in America, really, until the 1990s when a man in California decided to commercialize the product.

The man is known as George Thomas “GT” Dave, and he is the founder and CEO of GT’s Living Foods, still the most popular kombucha brand in the states.

His parents were into Eastern culture and made their own kombucha at home with SCOBY from a friend.

Dave loves kombucha primarily for its “health benefits,” but the science is still out on those.

Some research has been done in labs that shows kombucha has tremendous healing properties, including everything from being probiotic to antioxidant and antibacterial. It is touted as being beneficial for heart disease, diabetes, and fatty liver disease.

But here’s the thing: tea, and green tea especially, have most of those same benefits. Add in fermentation, and you’ve got your probiotics as well.

So, is kombucha a wonder drink or drug that will cure your diabetes or your fatty liver disease?

You can always just drink green tea and eat some yogurt and then you’ll know for sure that you’re enjoying a whole wealth of health benefits that have been repeatedly proven in scientific studies.

But that does not mean you have to stop enjoying kombucha, if you enjoy it.

It certainly should contain all the same health benefits as black and green tea and fermentation. And while numerous reports have been made as to deleterious side effects as a result of poorly made kombucha, you won’t have to worry about that as long as you stick with a reputable company.

As for making your own?

It might be best to wait until you learn more. SCOBY can be tough to work with, and you want to make sure you have a highly sanitized environment, especially during secondary fermentation.