Asbestos has been widely used between the 1930s and the 1970s when it was first restricted for use across North America. As many companies kept old stocks of asbestos-containing materials (ACM) that they chose not to waste, though, constructions were still being built with ACM even until the mid-80s, both in the US and Europe. This means that today any type of renovation or reconstruction being done on these buildings comes with the danger of asbestos contamination.

Working together with an international lab network, Oculyze has developed an automated detection system of asbestos fibers in SEM images meant to speed up lab work and increase effectiveness for laboratories all over the world that specialize in asbestos identification.

But why is the identification of asbestos important, how did we get here and where do different parts of the world stand right now on combating asbestos-related deaths?

The use of asbestos – a brief history

The use of asbestos by humans has a way longer history than many of us are aware. It was used in ancient Greece to create lamp wicks, pottery, and fire-proof cloth and it was later on used across the Roman Empire. However, it wasn’t until industrialization at the end of the 19th century that it started to be used on a large scale and it was at the beginning of the 20th century that the first asbestos-related deaths were diagnosed.

Even so, the ancient Greeks and Romans weren’t oblivious of the dangers that asbestos seemed to pose. The harmful effects of asbestos exposure on those who mined for it were documented, although a direct causal relationship was difficult to determine at the time. However, Greek geographer and historian Strabo described in his writings a “sickness of the lungs” that was widespread amongst slaves who mined for asbestos, while Roman author, naturalist, and natural philosopher Pliny the Elder talked about a “disease of slaves” and their attempts to protect themselves from inhaling the deadly dust.

Why is asbestos dangerous?

Fast forwarding some millennia, according to the Centers for Disease Control and Prevention,

“When handled, asbestos can separate into microscopic-size particles that remain in the air and are easily inhaled. Persons occupationally exposed to asbestos have developed several types of life-threatening diseases, including asbestosis, lung cancer and mesothelioma. Although the use of asbestos and asbestos products has dramatically decreased in recent years, they are still found in many residential and commercial settings and continue to pose a health risk to workers and others.”

Tens of thousands of asbestos-related deaths are still reported yearly all over the world, while the rate of asbestos removal remains relatively low, including in the US and EU.

Asbestos banning – where do we stand today

In the EU, several countries banned the use of asbestos throughout the 80s and the 90s, and a full EU-wide ban was issued in 2005. Nevertheless, the widespread use of asbestos cement roofs in many Central and Eastern European countries remains of serious concern, particularly as outdoor weather conditions can disintegrate the material over time and lead to the release of fibers into the environment.

In Western European countries, where a larger number of asbestos-containing products have entered over the years, there is a great concern regarding the sources of exposure that are more difficult to detect, such as ceiling and floor, textured paints, flooring glue, etc. and which may become particularly dangerous during renovations and maintenance.

In the US, the Environmental Protection Agency issued the Asbestos Ban and Phase-Out Rule in 1989, which imposed a full ban on the importation, manufacturing, processing, and sale of asbestos-containing products. However, because for decades asbestos (praised as being almost magical) had been the material of choice, numerous buildings across North America are still contaminated.

Why is it so difficult to identify asbestos-containing products?

First off, because they are so widespread. And while some are in plain sight, like the asbestos-cement roofs in Europe, on many occasions asbestos can be found in almost every part of a building, from its floors to the insulation and the heating or cooling systems. This is a particularly frightening thought when considering that there is an overall agreement in the scientific community over the fact that there is no safe exposure limit.

Secondly, because just collecting the samples alone can disturb the asbestos containing materials and cause the release of asbestos fibers. Only asbestos professionals know how to extract the samples and place them in an appropriate container before sending them for testing.

The automated detection system developed by Oculyze together with an international lab network can analyze SEM images in parallel to the SEM scanning process, making the analysis faster, the only limit being how many scans the SEM can produce. The cloud system can be deployed over multiple facilities, increasing effectiveness, comparability, and throughput for asbestos identification labs all over the world. 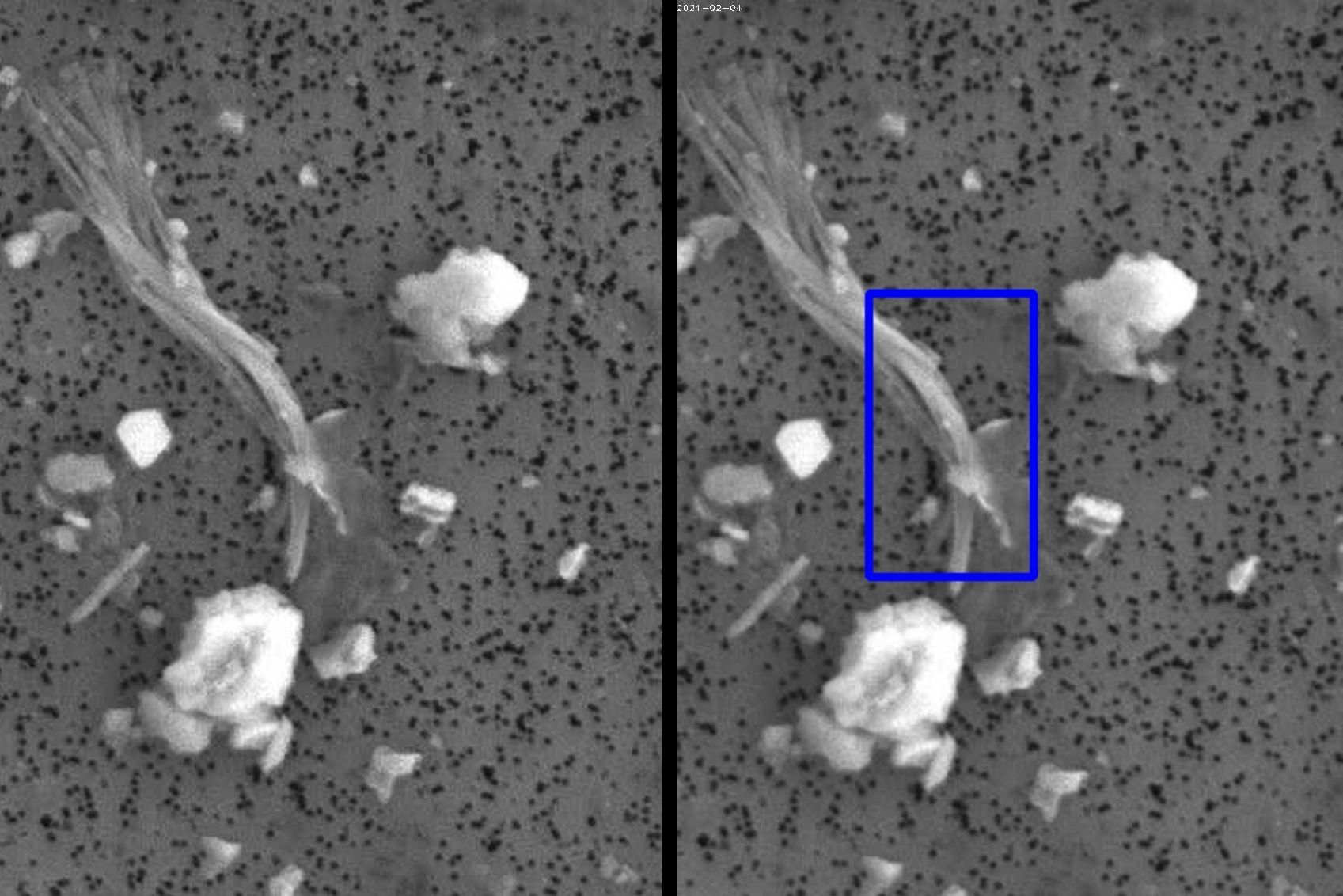 If you want to learn more about this particular automated detection system and how to identify asbestos or you are interested in developing a similar custom solution for your business, contact us at info@oculyze.net! Also, you can now test our asbestos survey app for free.